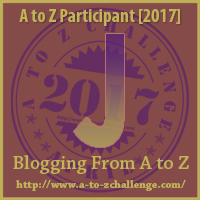 This month I’m taking part in the A-Z Challenge! Which means I’ll be writing 26 posts (on set days through the month) each one corresponding to a letter of the alphabet. Today is day 10, which means letter J.

I left Capinski at the station to call around about Anna, telling him I had a confidential informant I wanted to check in on. In reality I wanted to meet with my tech guy, Johnny, to give him the anonymous call, and my phone to check out.

Leaving the phone in the glove box of my car – out of hearing range – I used a pay phone at the corner to call Johnny. It went straight to voice mail, he never picks up.

The drive to the Sunrise Diner always frustrates me, hitting every stoplight on red with crazy long wait times. I asked Johnny once if he hacked the system to delay me arriving so he’d get there first. He said no, but I’m not sure I believed him. I have no idea where he actually lives – he could be 5 minutes away, or 45 for all I knew – and that’s how he likes it. I could look him up and ask around at the station, but I know he could also do serious digging on me, so we have a mutual understanding to leave things mysterious.

When I finally arrived at the diner I could see Johnny sitting in a corner booth and I waved through the window. He waved back, smiling.

I made my way inside and over to the table. He always looks so normal, you wouldn’t imagine he was breaking cyber laws on a daily basis, and is damn good at it. He ran a hand through his hair. His tanned skin was a few shades lighter than his hair, which was cut short but slightly scruffy like he’d just taken off a hat.

“Hey,” he said to me, then waved over a waitress.

I cringed. “You know they hate it when you do that here,” I said, smiling as I sat down across from him.

“Yes?” Said a very stern sounding waitress behind me.

“Coffee?” Johnny said to me.

“Sure,” I said, turning to face the waitress. Trying to give her my best smile. “Coffee sounds great!”

“Mmhmm,” she said and went to pour me a cup.

I shook my head at Johnny and he laughed.

“So what can I do for the enchanting Delaney Myers?” He said.

I waited while the waitress put my coffee on the table, saying a quick thanks before she walked out of hearing range.

“I need you to get the real voice from this altered voice message,” I said and pushed the thumb drive across the table to him.

He shrugged. “No problem. You said you need it urgently?”

“Yeah. It’s,” I stopped, not sure how much to tell him. “It’s an anonymous tip call, I need to know who phoned it in.”

I waited for any kind of reaction. We’d never talked about my day job and I always assumed he wouldn’t take too kindly to me being law enforcement because of what he does.

He shrugged again, the faded design on his t-shirt rippling over creases as he moved.

“What we do here,” he moved his fingers to point between the two of us, “Would screw both of us if anyone found out, so I know you’re not playing me.”

“How did you find out?” I said, leaning back.

“I saw you on the news!” He said, grinning. “It was weird, I felt kind of proud of you. As if my help had guided you to victory.”

I laughed. “You’re in no way a father figure.”

“Damn straight,” he said, leaning back in his chair, grinning.

“Before we get completely off business,” I said. “There’s a second part in my car.”

He raised an eyebrow.

As I explained what had happened with my phone – leaving out the part about dead bodies – his smile grew. He loves taking on an adversary, instead of grunt work like the anonymous tip clean up.

“Lead the way,” he said, motioning to the parking lot.

1 Response to Johnny (Secret Diary Of A Serial Killer)